Today was supposed to be a lovely bank holiday and national celebration to mark 75 years since VE Day. Whilst it is still all of those things, it sadly isn't going to be a day in which we can gather together to remember the sacrifice of all those who served in World War 2 to defeat evil.

I hope however that you will be able to take some time out today to remember the sacrifice of those who served in that conflict from across our country and the Commonwealth.

It is important that we never forget their sacrifice which is why it was a real privilege to join Cllr Caroline Fox (with appropriate social distancing) last week, tidying the four Commonwealth War Graves at Pollington and ensuring that the poppy wreaths were clean and some plants were added. Getting plants was quite a challenge but we did the best we could.

There are four Commonwealth War Graves at Pollington - 2 Canadian airmen and 2 British airmen. The two Canadians and one of the British airmen were killed when their plane crashed on its return to RAF Snaith. The other British airman was killed in an accident meaning none of them lived to see the end of the war.

I previously brought the Canadian High Commissioner to Pollington to lay a wreath at the graves and I really hope that wherever the families of these airmen are today they might know that their graves are still tended to and their sacrifice appreciated.

Many talk of us being in a war against this virus right now and I suppose we are in a certain sense. However, we should also remember that it is very different to the dangers and sacrifices required of the mainly young men who were sent off to Europe to rid if of the evil that had swept it.

Their sacrifice should never be forgotten and I hope today we can all pause to remember all those who served in that conflict which 75 years ago today result in victory in Europe. 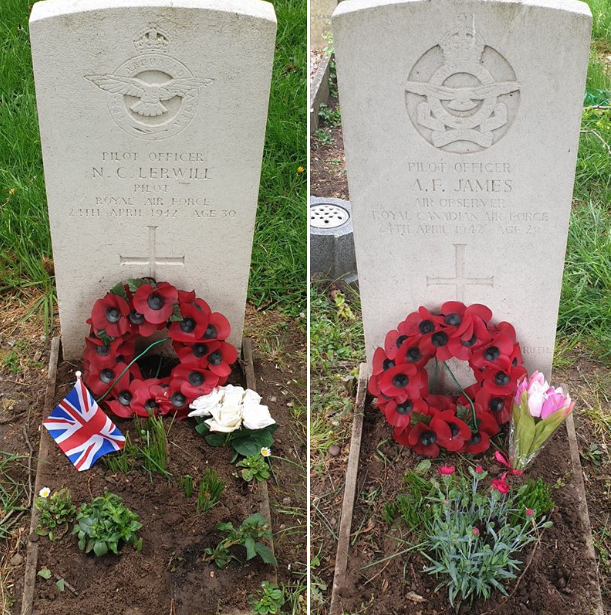