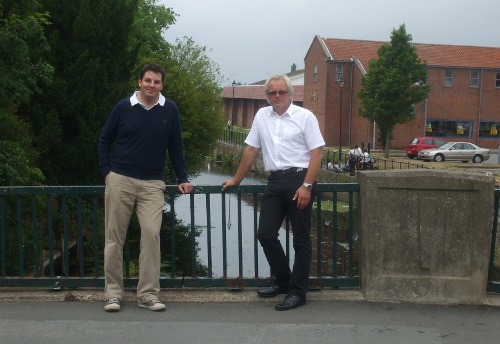 Your local Conservative team have launched a campaign for improvements and a clean up of County Bridge, Brigg. Andrew has joined Brigg and Wolds Councillors Carl and Nigel Sherwood in calling on residents to support the campaign by signing a petition demanding action.

Brigg and Wolds Councillor, Carl Sherwood, reports, "I have already met with Council officers to discuss this issue and have outlined our view that urgent action is needed to tidy the bridge up. The bridge has become increasingly untidy and dilapidated in recent years and clearly needs sprucing up.

"There have been efforts in the past to renovate the bridge which have, sadly, being unsuccessful. I am determined to take up the fight and campaign for improvements.

"We would like your support on this which is why we are asking residents to show their support by completing the petition linked at the bottom of this article. The more we can show we have local people behind us, the more likely we are to get action."

Prospective MP Andrew Percy adds, "The current state of the bridge really lets the town down, which is why we are determined to fight for action to improve the bridge and make sure that it is a real feature we can all be proud of. Obviously, we can’t promise an instant success, but the more people who sign up to support the campaign, the more pressure we will be able to put on those with the resources to act!"