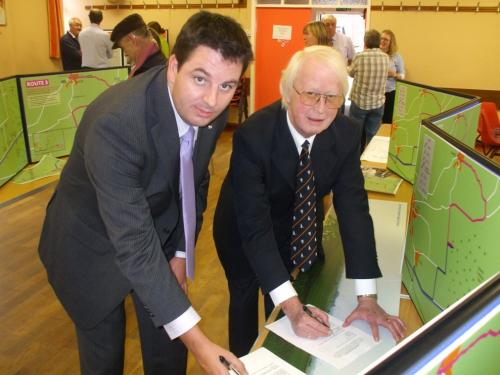 Prospective MP Andrew Percy is to meet with Network Rail and British Waterways this week in a bid to help residents fighting plans to bring thousands of construction vehicles through Ealand Eastoft and Swinefleet. The vehicles are destined for the Keadby Wind Farm and will cause residents months, possible years of inconvenience.

Andrew Percy reports, "These proposals have already been rejected by the Council but the wind farm developers, RES Ltd, could re-submit them for consideration should they not be able to find an alternative route. The most appropriate route is for access directly off the A18 which was exactly what RES originally proposed.

However, this route requires the crossing of the railway and the canal and as such the agreement and involvement of Network Rail and British Waterways are required. RES Ltd tell us that up to now they have been able to get this agreement.

I want to help that agreement along as best as I can which is why I have arranged meetings this week with both Network Rail and British Waterways to encourage them to get involved in helping to unlock the route off the A18. This would save residents a great deal of worry and protect our local villages.

A solution to this will only be found by working together which is exactly what I plan to do. The Save Eastoft Campaign have done a cracking job of co-ordinating opposition to the proposals and it is now vital that the politicians use their links to put pressure on RES, Network Rail, British Waterways and others to get a solution to the A18 route."