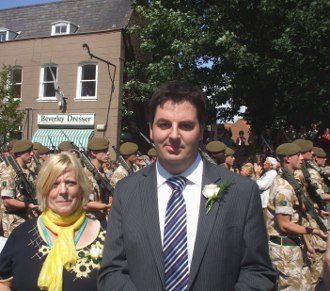 Prospective Brigg & Goole MP, Andrew Percy, and Snaith, Airmyn and Rawcliffe Ward Councillor, Caroline Fox, joined thousands of East Riding residents in welcoming the 1st Battalion of the Yorkshire Regiment to East Yorkshire last week. The battalion has recently completed tours of duties in Iraq and Kosovo and will shortly begin training for deployment to Afghanistan.

The ‘homecoming’ parade took place in Beverley where the troops marched through the town before being inspected by the Chairman of East Riding Council and the Lord Lieutenant of the East Riding.

Prospective MP Andrew Percy says; “Caroline and I wanted to show our support for the troops who have served our country proud in both Iraq and Afghanistan. The parade was especially poignant given the recent heavy casualties in Afghanistan, where these troops will shortly deploy too.

The reception from the thousands of residents who came out to cheer the 1st battalion was very moving, and I think everyone there felt quite emotional. It was really great to see so many people come together and it really did remind us that, as difficult as the times may be for our country at the moment, there is still a lot of pride in this country and the values it stands for.

The 1st battalion will deploy to Afghanistan following their training and we must all pray that they return safely as soon as possible.”

Cllr Caroline Fox adds; “It’s about time we got behind our troops and showed them that, whether you agree with the conflicts in Iraq and Afghanistan or not, we are proud of their work and we respect them for putting their lives on the line for our country. You could see the pride in the young men as they marched last Thursday and I know they appreciated the huge turnout.”