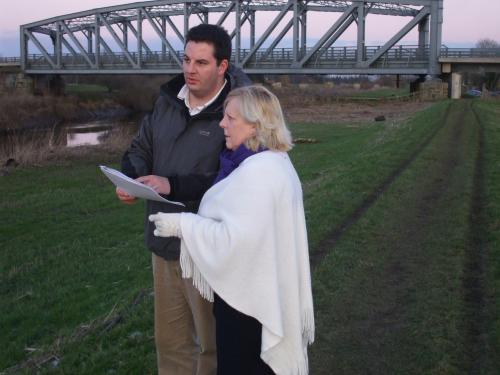 The Environment Agency consultation into flood plans for the Rivers Ouse, Aire, Trent and Don have officially being launched with the start of a 12 week consultation period.

The original plans for the River Aire and the River Trent caused an outcry locally when they proposed increasing the risk of flooding on the Isle of Axholme and in the Snaith area.

Andrew Percy led campaigns against both of these plans and the Environment Agency agreed to look again at the proposals and then to re-consult. The new plans are now subject to a 12 week consultation which will run until April 23rd.

Prospective MP and Airmyn Parish Councillor, Andrew Percy, explains, “The new proposals are now live and I hope residents will comment on them. So far as the River Trent is concerned, the Environment Agency is now proposing to adopt a different policy which will see the current levels of flood protection maintained. More details on this will be released via the more detailed Isle of Axholme Flood Strategy which will be released in the coming months.

For the rivers meeting in the Goole area, the Environment Agency has decided that rather than simply apply one policy for the area, they have divided it up into smaller ‘clusters’ where different policies are proposed.

"The Environment Agency are now proposing to adopt a policy that will continue with existing levels of flood protection for the area covered by cluster 4. For cluster 6, they propose to go further by adopting a policy which will see them taking further action to sustain the current level of protection into the future, as the risk of flooding increases. For the Snaith and Gowdall area, cluster 5, they propose adopting a policy which will ‘take action with others to store water or manage run-off in locations that provide overall flood risk reduction or environmental benefits.

’They go on to say that this policy would see better use of the washlands in the event of river or tidal flooding. Personally, I want to know more from the Environment Agency about what this will actually mean as I will not accept any proposals which will put homes at risk of more flooding.

"I have contacted them requesting more information as we cannot accept anything which would see flooding increased locally. There is also a consultation event organised for Monday March 8th at the Goole Leisure Centre. Representatives of the Environment Agency will be present between 2pm and 7pm to answer residents’ queries and to record their views."

Anyone wanting to know more can either contact Andrew or visit the Environment Agency website. The plans can be found by clicking on the links below -

Photo: Andrew discussing the plans for the Aire with Cllr Caroline Fox in Snaith.