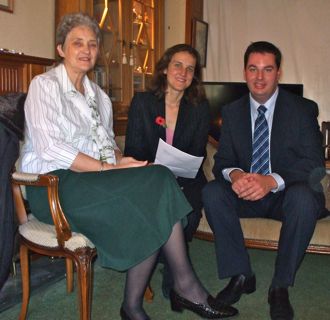 Prospective Brigg and Goole MP, Andrew Percy, welcomed the Conservative’s Shadow Transport Secretary, Theresa Villiers MP, to North Lincolnshire and East Yorkshire last week, where she committed a future Conservative Government to action on the Humber Bridge tolls. Ms Villiers met with local campaigners and promised that a future Conservative Government would initiate a full treasury-led review of the Humber Bridge looking at all aspects of the tolls and bridge debt.

Andrew Percy says, “Theresa Villiers came to the bridge to announce that a future Conservative government would undertake a treasury led review of the tolls which will look at all possible options for the bridge. I explained to Theresa the way in which the toll divides the local economy, limits employment opportunities and also costs patients who need care on the north bank dearly. I’m pleased to say that Theresa confirmed that the Humber Bridge was one of the most important issues in her in-tray.”

Shadow Secretary of State, Theresa Villiers MP continues, “If the Conservatives are elected as the next Government, we will commission a Treasury led review of the Humber Bridge tolls and their economic impact.

"The review we propose will be an objective and thoughtful analysis of the relevant issues around the tolls. This decision is the direct result of the determined and effective campaign run by the region’s newspapers, local councillors and campaigners such as Andrew Percy who have all worked incredibly hard to highlight the very real concern about the tolls within the communities living near the bridge and put the case for change.

"While it is true that the state of the public finances means that there are no easy solutions here, we believe that it is vital to look at the whole issue in the round and carry out a thorough investigation of the facts. The review we propose will be an objective and thoughtful analysis of the relevant issues around the tolls. We will look seriously and carefully at all the options with an open mind and give the communities affected by the issue a fair hearing.”

Andrew adds, “If elected, the Conservatives will be the first Government in the history of the bridge to commit to a full treasury led review of the tolls and the bridge debt. The involvement of the treasury is vital as that is where the debt is held and only with their involvement will anything be done about the underlying debt issue. Unlike the  recent short term announcements, which are more about the forthcoming election, this announcement goes much further by offering us the possibility of real long term solutions to the toll issue. ”