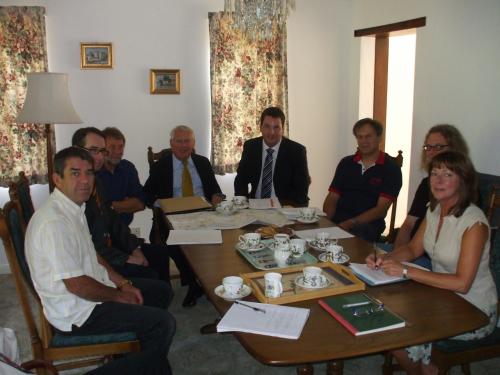 Andrew Percy reports, "The North Lincolnshire and East Yorkshire area has seen a large number of applications submitted for wind farms in recent months, many of which are located close to properties. We have always taken the sensible view that our area should take their fair share of turbines but no more. This approach means that both North Lincolnshire and East Yorkshire have already hit their 2020 targets for renewable generation.

Sadly, this target is totally meaningless though as the Government require the target to be moved up once it is reached and it does not serve as a ceiling. That is why we are seeing so many applications. I personally believe that we should be diverting much of the subsidy which is presently directed at wind turbines onto other sources of renewable generation such as wave, tidal and geo-thermal.

Bob listened carefully to what was said and promised that the Conservatives were determined to redress the planning system in favour of local residents by restoring local decision making. In particular a future Conservative government would -

These are important proposals which would give local people far more power. We need to go further by looking at the regulations which presently govern wind turbines such as increasing the distance required between turbines and homes.

This is not about being anti-wind turbine as many people who oppose these developments have no problem with turbines in the right locations. It is about redressing the planning system in favour of local residents to make sure that their voices carry more weight.

The Government has recently announced that it plans to make it even easier for wind farm developers to get permission, even in the face of strong local opposition. We cannot allow that to happen."