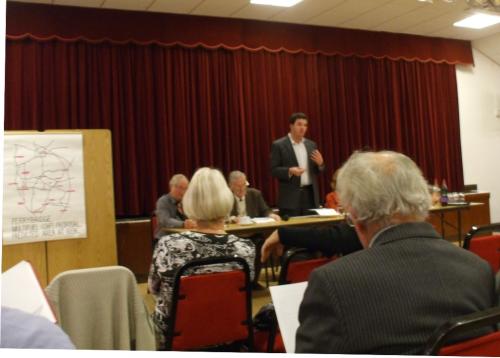 The concerns relate to a proposal by Scottish and Southern Electricity to construct a multi-fuel combined heat and power incinerator at the Ferrbridge Power Station. Concerns have been raised about the pollution generated from this facility and the impact the emissions could have on the Goole, Snaith and Isle of Axholme areas. The facility would burn a variety of fuels including biomass and waste wood and would have the capacity to generate 90 megawatts of power.

Prospective MP Andrew Percy says, “I was contacted by the Chairman of a campaign group, A.I.R.E, who are fighting this proposal who asked me to Chair the meeting. The group are fighting the proposal on the basis of concerns about what will be burned at the facility and the impact these emissions could have on public health.

The main crux of the concerns raised at the meeting related to the emissions from these facilities and the impact they can have on the health of people living in the vicinity of them. Dr Van Steenis was very clear that in his view people in our area would be affected by the emissions.

I’m no expert on incineration but I would obviously be very concerned at anything which would impact negatively on our area. We really need to be assured that there will be no negative impact on local health. It is really important that anyone who is concerned about either of these proposals makes their views known as soon as possible.”