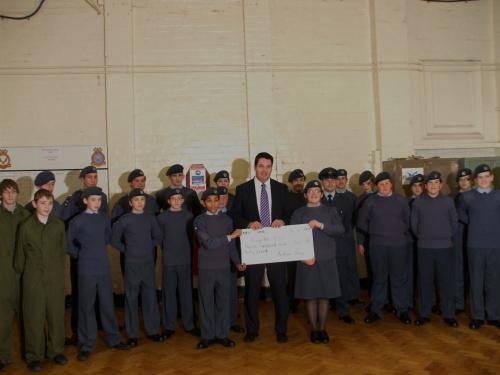 Prospective MP Andrew Percy met with members of the Goole Air Cadets last Friday where he handed over a cheque for £340 to the group. The money was raised by Andrew at a recent dinner attended by Shadow Foreign Secretary William Hague MP.

Andrew Percy says, “I was delighted to be able to hand over this money which I know the ATC will put to good use. It’s really important that the work of groups such as the ATC are acknowledged and supported as much as we can. Young people often get a pretty bad press, so it was a pleasure to be able to meet with the Air Cadets who were not only extremely polite, but were also brilliantly turned out and disciplined.

It is also important to acknowledge the work of the adults who help support organisations such as the ATC. Volunteering to work with young people involves a lot of commitment as well as a lot of paperwork these days and so I pay tribute to those who give of their time freely.

Supporting young people is something I am committed to doing which is why I have raised money for other youth groups in the past such as the Snaith St John Ambulance. I shall continue to do what I can to support these and other groups in our area.